Way before I went vegan I used to love baking up sweet treats for myself and the family, one of our favourites was this super moist lemon cake that I made a few times. But after becoming vegan I pretty much stopped baking because I didn’t know how to make anything without using eggs. A few days ago I was seriously craving some sugar and was feeling inspired to finally hit the kitchen and try to veganise my lemon cake recipe. Spoiler alert: it was a huge hit with the fam :))

In our house, we LOVE ramen. Before we became vegan, there was a time when Max and I used to go and have ramens for lunch at least once every week. There was a little restaurant run by Japanese guys down the road from my office and they had a lunch special where you could get a huge bowl of ramen with gyozas and rice for something like $15 NZD. It was epic. And epic-ally delicious.

But not so healthy 😦 Max gained some fair amount of weight those days haha.

It has been really hard finding a good vegan ramen. We went to a few places but none really hit the spot. Then I came across a recipe from Serious Eats that just sounded too good not to try. I tried it but with some modifications to save time. The first time I made it, Max’s verdict was that I shouldn’t make it again because it took a lot of time and for that amount of time the taste was not matching up to it.

But I didn’t give up.

Since then, I’ve been trying different variations and trying to perfect it and make it better each time. The last time I made it was about a month ago and it was DELICIOUS. We all loved it and had seconds. And, it took less time.

Max especially requested that I made ramen today and I was more than happy to oblige 🙂 And this time, I recorded it all down on paper (or well, actually, on this blog) so next time we can repeat it exactly as it was this time around. Perfection. Max said he wanted to eat my ramen because he had ramen a few days ago for his work dinner, only it was not vegan (vegan fail!) and he did not like it. Can you believe it, after dinner today he told me that this vegan ramen tastes much, MUCH, nicer than the one he had a few days ago. WIN!! YUS. DELICIOUS, PERFECTION, VEGAN RAMEN: ACHIEVED! 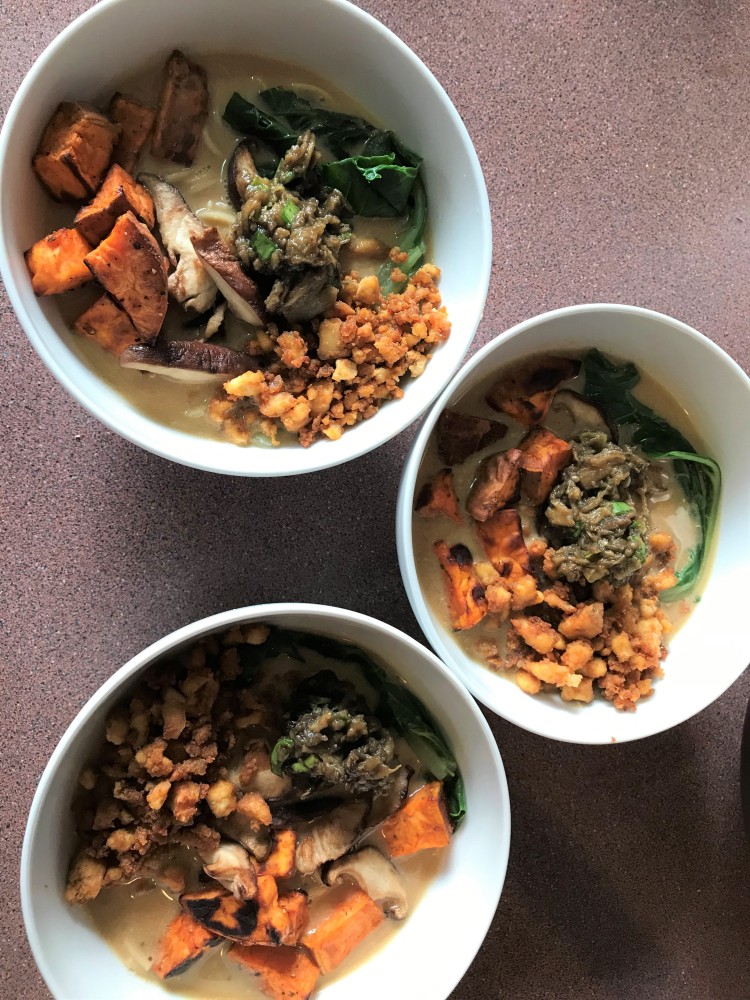 For the sweet potatoes

For the eggplant and stock

For the crumbled tofu

For the tahini-miso paste

Step 6 – Make the sweet potato mixture to add to stock

Step 8 – Prepare the tahini-miso paste to add to stock

Step 10 – Blanch the bok choy and cook the ramen noodles

Step 11: Putting it all together 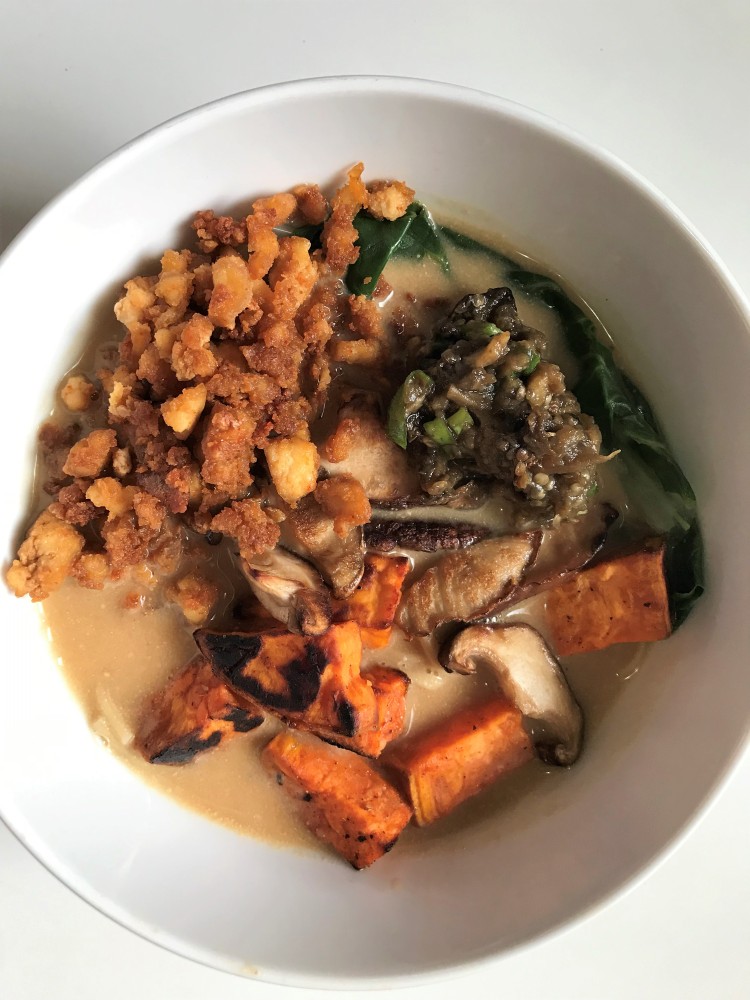 Dahl and veggies with rice, ah, perfect dish for cold Winter nights. Aaaaaand, according to Dr Gregor, lentils beat other beans in their antioxidant content, and they are good for heart health and for fighting cancer.

So, win for the lentils!

This dish is easy to make and makes enough for yummy leftovers the next day. 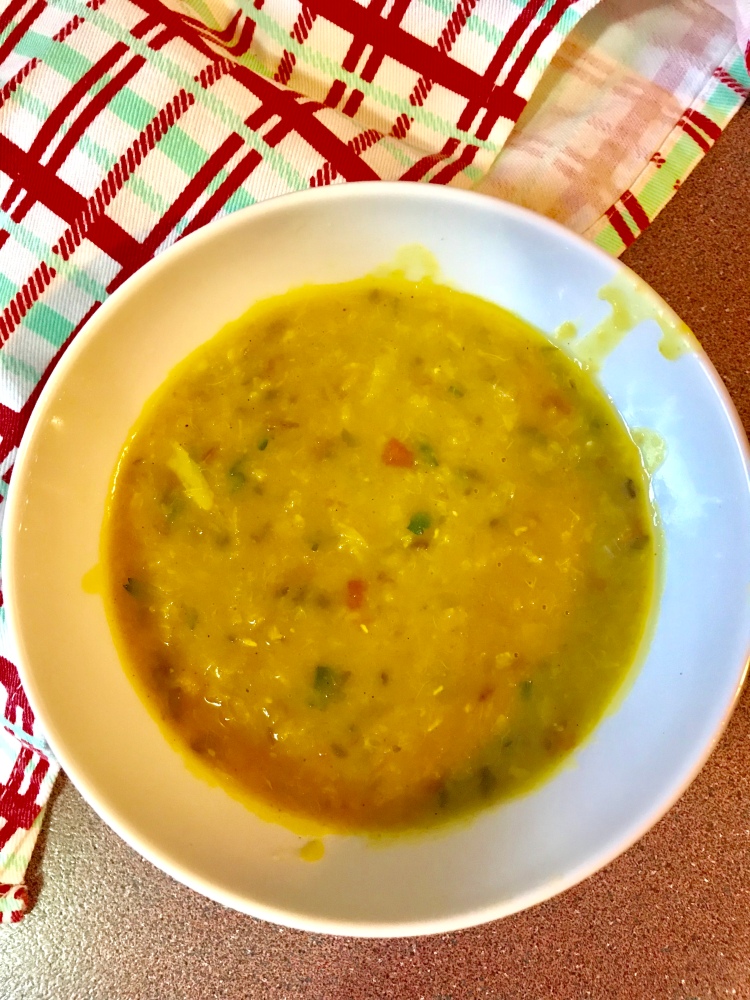 I posted our favourite overnight chia seed pudding recipe a while back, which is Max’s absolute favourite weekday breakfast. BUT, I find that to be toooooooo cold to eat on a freezing cold Winter’s morning. Especially since we wake up when it is still dark outside!

So I went looking (experimenting) with different, warm, things that I could have for breakfast. And, BEHOLD, the most delicious, comforting, healthy and delectable breakfast recipe was created. Warm, creamy, soft oats topped with delicious, sweet blueberries and tarty raspberries, with chopped nuts and seeds to top it all off. It is heavenly! This is my favourite breakfast at the moment. I even feel like eating it on the weekends!

The warm oats and cold berries make a really, really nice combination and the textures added by the nuts….mmmmmm….just devine. 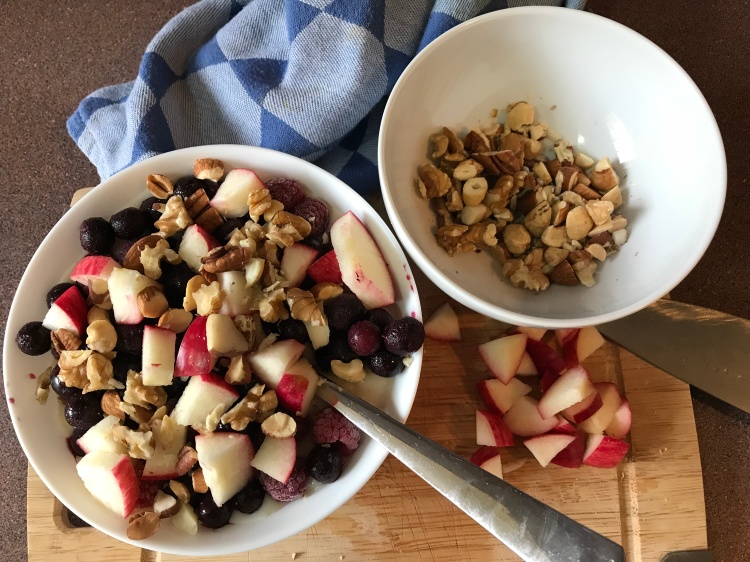 PS: I use frozen blueberries and raspberries because those are the ones I love but you can use any berries you like.

Today and the day before yesterday Shalveena has not been feeling very well. She was in a lot of pain; probably caused by inflammation. She thus had to temporarily yield her primary domain, the kitchen, for a few days. The following soup I cooked with the objective to reduce inflammation (Turmeric, Garlic, Cauliflower) and reduce pain (Ginger).

The soup is now ready. Serve with brown rice or by itself!

It is freaking COLD here! I read that a few days ago Melbourne was the coldest city in the world one morning! That is crazy cold.

Max has been leaving home at 7am, which means its still cold and dark outside and the sun is no where to be seen. He was sniffling and feeling under the weather so yesterday I offered to make whatever he wanted to eat. He said “Chickpea Soup”. So, here it is – chickpea soup for a cold Winter’s day. Its super easy and is made up mostly of pantry staples that I always have on hand anyway (actually, on that note, we only have 1 can of chickpeas left in the pantry after this and I forgot to buy it when going grocery shopping for the coming week….sigh).

This dish is super easy and quick to make, perfect for when you’re feeling a bit under the weather. 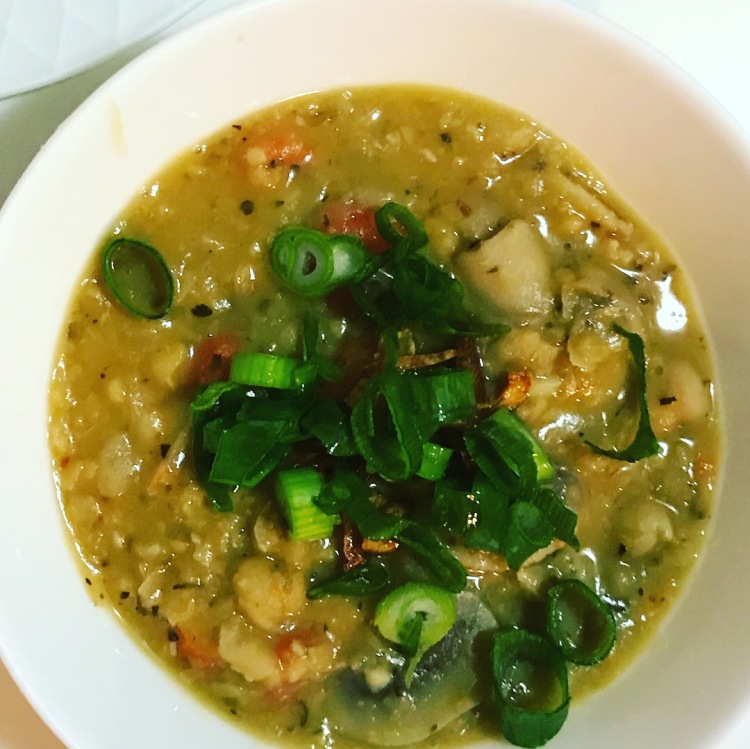 We went to a German restaurant, which served Bavarian style dishes, a couple of weeks ago with some visiting friends. Unfortunately, it seems that Bavarian cuisine is a bit light on the vegetarian/vegan dishes, but when we asked which dishes were vegan/could be made vegan, we were surprised to hear that the potato salad was vegan. Ah?! No mayonnaise in it?? Yes, yes, yes! It appears that some German potato salads have no mayonnaise! Instead, it is made using vinegar and herbs.

The potato salad we got was creamy and a little tangy. It was really yum.

I decided to recreate it.

Of course, having no clue about German cuisine, I asked my friend Google for help. Sadly, though, it seems Google was a little bit lost when it came to finding German potato salad recipes without meat or animal products. (Yes, Max IS German, but he is not a big fan of German food – or so he tells me – and he has not much of an idea how to make it either!)

Luckily, I found this and this recipe, which I used as a reference point when making the salad. It turned out delicious and, you know what, it was super healthy (well, as far as potatoes go)!

Following the theme of my previous post, I herewith present another recipe which uses Soy Chunks as delicious replacement for meatballs.

Serve with the pasta and enjoy!

Today was one of those days. I felt tired of cooking all week and wanted to have something easy for dinner. It’s winter. It’s cold in our house. It was dark outside. It was a day for soup. But not just any soup, a soup that would require little time and work!

I also wanted to broaden our range of foods beyond just rice and pasta, and so I thought, hey, I have some frozen taro in the fridge, let’s use that! Instantly, what came to my mind was some yummy mutton soup with taro (or dalo as they call it back in Fiji). But alas, no mutton on a vegan lifestyle. And so I veganised the soup 🙂

I used our super healthy and yummy vegetable stock, which I always keep in the fridge for just such days. It turned out really tasty and was so easy to make. AND it is healthy and has no oil! AND it all comes together in just one pot. Win, win and win!

I used the vegetables that I had in my fridge, but this is a soup where you can easily substitute the veggies here for whatever you have on hand. I think some carrots would go nicely in this soup, but I didn’t have any today. Maybe you could also use some onions instead of onion powder. Feel free to play around with it and make it your own.