Our last morning in Phuket 😦

We woke up early to pack and eat at the local street stall one last time: 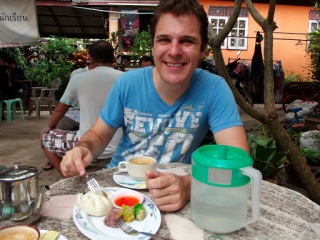 After breakfast, we checked out and were on our way to Phuket airport via shuttle. The shuttle was empty save for me and Max and the driver talked all the way to the airport. He told us about his family – he has 3 kids – about how Thai prefer the rainy season as it is not so hot and they save the rain water for drinking and using in the hot season (they pay for government water but it gets more expensive during the hot season) – about how they find it too cold to ride a scooter at night during the rainy season. It made for an interesting conversation – especially given our language differences.

We arrived at Phuket airport around 10.40 am local time, Saturday 15 June 2013. As we were taking a domestic flight to Bangkok – this part of the airport was very small, and there was a huge crowd of Chinese from Hong Kong, who filled the single duty free shop there.
We tried a hot dog from Dairy Queen – seems the locals are big on sausages. It was okay-ish but not close to the yummy German sausages Max’s friends barbequed during our visit to Hamburg.

Bangkok’s Suvarnabhumi Airport, in contrast, is huge! With all kinds of shopping to be had – bags, cosmetics, clothes, watches, food. We spent some time having a look around – but our hand luggage was quite heavy so we eventually found a nice place to sit and waiting for boarding time. Not before having a nice coconut though – yummy! 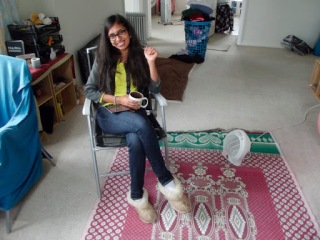 I am a passionate cook, traveler and explorer of all things unknown. I also practicing law in Melbourne, Australia and specialize in family law. View all posts by Shalveena Rohde